Are There Poisonous Spiders In RI?

Home › Blog › Are There Poisonous Spiders In RI? 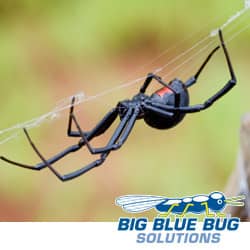 With the end of summer now in sight the likelihood of running across a few extra eight legged houseguests is not uncommon or unexpected. The two most common are the house spider, found throughout the world, and the sac spider, originally a European spider but now with a large population in North American houses thanks in large part to the trade industry. Though the sight of any spider can be terrifying to some, most are completely harmless to their human housemates.

In the colder weather, you might find yourself with an extra houseguest, even in Rhode Island. Though a rare sight, the black widow spider has been known to take up residence out of the winter weather as well. Though they typically like the outside spaces where it is dark and quiet such as in tree stumps or in rock crevices, she has been found in sheds, garages, closets and basements. The black widow is easily identifiable by her shiny black body with the red hourglass shaped spots on her abdomen.

Like most spiders, the black widow is a predatory spider eating other arachnids and other insects who have the unfortunate luck of stumbling into her web. Being a homebody, she remains in her web most of the time and waiting for her prey to come to her. Generally, if a spider’s web is unsuccessful at catching food she will eventually abandon it and move on to a better location.

The black widow spider, though a rare sight, is not one that you will want to take too lightly. Though they do not intentionally set out to harm a human being, the female widow is venomous. They will bite if they are threatened or trapped. The bite of the black widow can make a human extremely ill causing pain, fever, chills, muscle cramps, and headache among other symptoms. If you are bitten, it’s advised to seek medical attention immediately.

For the safety of your household, it is better if these particular pests are not spending their time in your home. As soon as the warmer weather is back, they will lay their egg sacs creating even more of the distressing and sometimes dangerous pests nearby. Do not handle them on your own. In the interest of safety, you should give Big Blue Bug a call if you’re finding an abundance of spiders in your home.