Do Yellow Jackets Lose Their Stingers? 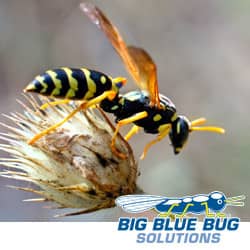 Though yellow jackets resemble honey bees, without the tan fur, that is where the resemblance ends. They don't carry pollen, and they don't have the flattened hairy hind legs to carry it. They also don't lose their stinger when they sting you. An adult yellow jacket can sting several times--and is happy to do just that.

A tale of woe.

When I was a boy, my cousin and I explored every inch of the small wood area next to our trailer park. We picked apples from a few wild apple trees, and we hunted frogs in the brook that wound its way through, completely unaware of the dangers all around us. One fateful day I found an old dry stick, and hefted it into the air, proclaiming with pride that it was my sword. My cousin, who was prone to mimicking everything I did, found a stick of his own, and made a similar proclamation. We then proceeded down a path we had traveled many times. I swung my "sword" back and forth in front of me, explaining as I went, that this was now a dangerous jungle, and it was my job to cut our way through. My cousin, fulling engrossed in the game I had begun, began swinging his stick as well. But he was not content to be my second in command, halfway down the path he found a way to get in front of me, and soon he was swinging his stick back and forth vigorously--in a motion that had more in common with golf than path forging. But this motion was quickly replaced by another motion, a sort of jungle monkey dance. I took a step back, my brain not fully able to comprehend what was happening. "Beeeeeees!" he screamed. It is in times of great peril that we are tested to see what manner of man we will become. And I, seizing the opportunity to its fullest, did what any mighty man would have done: I ran like crazy.

If you don't have a nine year old cousin to shield you from a yellow jacket attack, your next best option is to get a professional to check your property for bee and wasp nests. Yellow jackets are easily provoked. And since their nests can be in a stump, or even in the ground, it is easy to accidently spook them. Whether it is a swinging stick, a vibrating lawn mower, or a fast moving child, yellow jackets will come out in force to defend their nest. What's worse, is that as summer ends and fall begins, yellow jacket nests are reaching a maximum capacity of 4,000-5,000 wasps. If I had gone into those woods with my cousin at the end of summer, instead of the beginning, that story would have ended much worse.

With a little precaution, you can make your fall cookouts and lawn activities safer, by having those nests located and removed. And if you’re looking for help to get rid of wasp nests or any stinging insects from your property, give us a shout!