How To Keep Millipedes Away From Your Worcester Property

Home › Blog › How To Keep Millipedes Away From Your Worcester Property 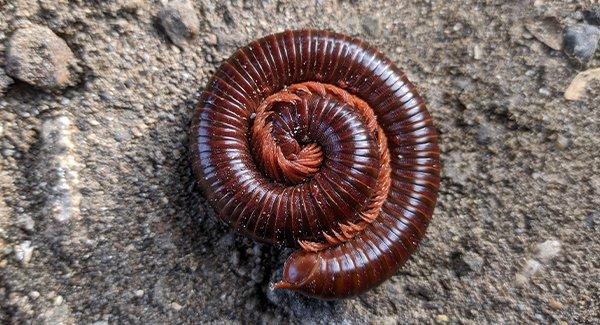 Of all the pests you could discover around your Worcester, Massachusetts home, millipedes might be one of the strangest. These creepy crawlers look decidedly weird as if they are alien creatures of a prehistoric fossil come to life. However, they are actually a fairly common household pest that can make its way into both businesses and residential properties.

Millipedes are known for their many sets of legs, and, while it’s true they have a lot of them, they don’t have thousands of them as some people have heard. They generally have around 30 to 90 pairs of legs. These pests are often mistaken for centipedes because both have many limbs and are long, crawling pests.

However, millipedes have a more worm-like appearance than centipedes. Millipedes also have legs that are more hidden under their bodies while the legs of a centipede stick out to the side. Lastly, millipedes don’t have the long feelers that centipedes do.

In this guide, you’ll learn everything you need to know about these odd-looking pests including the dangers of having them on your property and how to remove them.

Are Millipedes Unsafe To Have Around?

Generally, millipedes are considered a nuisance pest. This is because they aren’t known to harm humans or animals, and they don’t bite or sting. However, some millipede species emit a toxin called hydrochloric acid. But, because it’s released in such small quantities, it’s rare that it can impact people.

Because of this substance, it’s not advisable to touch or handle millipedes. Some people who touch these pests will end up with a rash or skin discoloration. If you do touch a millipede, you should wash your hands immediately afterward.

It’s also worth noting that some species of millipede can emit a foul odor, but not all of them do so.

Why Do Millipedes Get Inside?

While some pests in the area, such as rodents, will come indoors frequently in search of shelter or access to food, millipedes aren’t one of these species. They generally prefer to live outdoors, and in humid environments. When outside, they are usually found under stones or fallen branches where there is a lot of moisture.

However, millipedes will come inside to seek shelter if conditions get too harsh. This can include extremely wet environments from an excess of rain or extreme drought conditions. But, since they usually live outside, millipedes usually don’t infest properties as invasively as other species in the area.

To help keep millipedes away from your property, you can follow these steps:

It's worth taking the above steps to lessen the odds of attracting millipedes to your property, but prevention methods are not as effective once a population has moved in.

While millipedes are mostly just a harmless nuisance, they can still be upsetting to have around because of their weird appearance. No one wants to have bugs in their home or business. If you are finding millipedes in or around your property, professional assistance can remove them.

The experts at Big Blue Bug Solutions have over 80 years of experience providing both residential and commercial pest control to the Worcester area. Just give us a call to learn more about millipede prevention and removal.

Have You Found Clover Mites On Your Milford Property?

Do you know anything about the clover mite? Can they bite you or cause damage? If you want to know more about this tiny bug and what it can do to your home, keep reading.

Keeping Beetles Away From Your Worcester Home

Do you know what beetles in Worcester look like? Or how to prevent them in your home? Keep reading to find out more on how to deal with this peculiar pest.

Once again, I feel compelled to write because I had such excellent service from one of your technicians, Shane. He was efficient, courteous, helpful and nice to my dog! Thank you for sending well-mannered and competent inspectors.