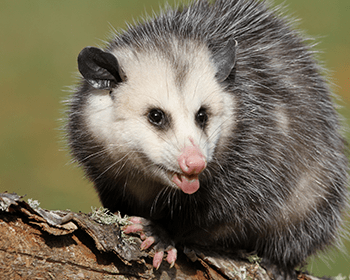 Most people can point to an opossum in a lineup of wildlife creatures. Its white face and pointy rat-like nose and tail are easily recognizable. But most people really don't know all that much about these critters. And, if you've been seeing opossums on your property, it is probably a good idea for you to take some time to get to know them. It might just save you from having an unfortunate incident. Here are five things you may not know about opossums, and a few things you really should know.

While these furry creatures can be quite interesting, they can also create many problems when they come onto our property. One of the most prominent problems they cause is lawn damage. Opossums are fond of grubs. When they come into a yard, they will damage turf grass as they dig to get at the grubs under the surface. But, arguably, those grubs would have done some damage anyway.

If an opossum makes its home under a porch, deck, shed, or outbuilding, it may present a danger to pets and children. While not an aggressive animal, by any means, it will defend itself if cornered or protecting young. Most of the time, it will open its mouth wide and bare its teeth as a threatening posture, or simply play dead.

The real risk of opossums is in the introduction of parasites such as fleas and lice, especially to domesticated cats. Outdoor cats are curious and are prone to go into areas where opossums have been. When they do, they can pick these parasites up and bring them into the house. It is important to note, however, that opossums are incredible groomers and this drive for constant grooming perfection makes them a rare carrier of ticks. In fact, they eat and digest most of the ticks that are unfortunate enough to get on them.

There are many suggestions on the internet for how to deal with an opossum on your property. We don't suggest that you take this advice. When dealing with any wildlife creature, it is best to have a trained professional do the job. A professional will follow strict protocols for the proper humane handling of the animal, address any secondary pest issues, implement strategies to avoid future infestations, and adhere to all governmental regulations regarding the creature.

When homeowners take it upon themselves to remove wild animals, they learn very quickly why they are called "wild" animals. No matter how docile a creature is, fear is a strong motivator to lash out. And, while it doesn't prefer to use them on humans, opossums have an impressive set of sharp teeth.

If you are in our New England service area, reach out to Big Blue Bug Solutions. We don't just take care of bugs. We have a wildlife division with trained wildlife removal experts that are trained to completely handle a wide range of wildlife control needs, headed up by our wildlife manager Rich Autieri. Rich is a regional leader in the wildlife industry and often collaborates with chief biologists for RI, MA, and CT. He and his team know the laws, regulations, and protocols for wildlife extractions, monitoring, and exclusions. You'll be in good hands.

The Secret To Keeping Mice Out Of Your Portland, ME Home

Of all the pests that infest Portland homes, mice are arguably the worst. These tiny rodents can destroy homes within a matter of weeks, contaminating food items, ripping through walls and furniture, and otherwise creating an unpleasant atmosphere in…

The Best Way To Protect Your Portland Restaurant From Rodents

Learn what it takes to protect your business from this threat.

To look at this person one would never guess. Who would think that such a slight individual physically, and one with such a courteous, respectful manner, could possibly be a cutthroat killer of the creatures that give certain members of this household not just the creeps, but the horrors? But that's what Sandra is proving to be for us. She is smart, knowledgeable about her business, and conscientious and ruthless in carrying it out. We slept better last night because she was here yesterday&hellip;