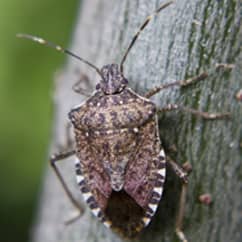 Stink bugs earn their name for their famous defense mechanism. They release a foul odor when they feel threatened. The smell is also released if the stink bug gets crushed.

Unlike many other pests, stink bugs are true bugs, meaning they belong to the order Hemiptera.

Stinks bugs are also known as shield bugs due to their shape. 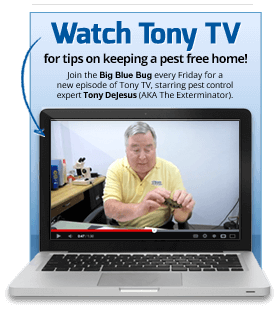 What are stink bugs?

Stink bugs are a type of agricultural pest that also invade homes in the fall months. They are not a native species to the United States. These insects were introduced into the country in 1996. Stink bugs get their name because when they are threatened or squished they will release a foul smelling odor from glands located under their thorax.

Stink bugs have brown and tan bodies and have patches of copper or blue-metallic on their heads. They are also called “shield bugs” because of the triangular shaped plate located on their backs.

No, stink bugs do not bite.

Stink bugs do not bite or sting and pose no danger to humans or pets. They are, however, a major agricultural pest and can cause a lot of damage to plants and farm crops. In addition to damaging plants, when inside of home’s their odor can become very overpowering.

What are the signs of a stink bug infestation?

If you have a stink bug infestation, you will see stink bugs congregating in large numbers on the warm sunny sides of your home. Inside your home you may notice a foul odor. As an agricultural pest you will start seeing damage to your vegetable plants and fruit trees.

Why do I have a stink bug problem?

Stink bugs look to move inside of homes during the fall months in order to seek shelter from the cooler weather. They will overwinter inside of homes and then move back outdoors in the spring.

How do I get rid of stink bugs?

Stink bugs can be very difficult to control and eliminate from your home because of their large numbers. The best way to handle a stink bug infestation within your home is to contact a professional pest control company. A year round, residential, pest control service can help manage and eliminate stink bugs and other pests in and around your home. Read more about Big Blue’s home pest control program right here!

I have two families to protect. My wife & kids in the house....and my classic cars in the garage. I don't want pests endangering either one..so I keep both my worlds safe with BBBS home maintenance protection.