Which Beetle Is Living In Your South Portland Pantry?

Do you know how many species of beetle there are in the world? If you were to venture a guess, how many would you say? Two thousand? Ten thousand? Try over 350,000 described species of beetle! No wonder you can't figure out what beetle has invaded your South Portland pantry! Fortunately, there is a small group of common pantry pests that tend to get into homes. They are flour, drugstore, sawtoothed grain, cigarette, and spider beetles. Knowing this, our pest control technicians can quickly help you figure out what you're up against. If it is one of the other 349,995 other beetles, we can help you with the identification of those as well. Why is identification so important? Because each pantry pest is a little different, and controlling pantry pests can be tricky if you don't know what you're dealing with. 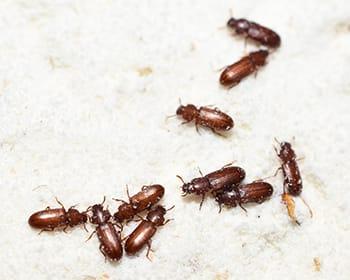 Flour Beetle — This insect is 3/16 of an inch long and is a reddish-brown color. Looking down on it from above, it has three distinct body parts. Its abdomen is half its length. It's thorax and head make up the other half with the head being slightly smaller. It is an elongated pill-shape and has two stubby antenna.

Sawtoothed Grain Beetle — This insect is ⅛ of an inch long and generally brown in color. It gets its name from the jagged look of its thorax, not that you would notice. Did we mention that it is only ⅛ of an inch long? Perhaps the only fun thing about sawtoothed grain beetles is their scientific name: Oryzaephilus surinamensis. Try dropping that one at a party.

Cigarette Beetle — This insect is 1/10 of an inch long and has a reddish-brown color. It is not called a cigarette beetle because it is shaped like a cigarette. It gets its name from the fact that it commonly infests tobacco. So what shape is it? It actually has an oval shape with a head that is ⅓ of its body length.

Drugstore Beetle — This insect looks a lot like a cigarette beetle. It has a similar shape and coloration and the head is ⅓ the size of its body. The difference is that it is more of a pill-shape than an oval. It also has different antennae, but this is difficult to distinguish. If you have a magnifying glass and you really want to know what you're dealing with, look for the three oblong shapes at the tip of its antennae.

Spider Beetle — This insect is 1/16 to 3/16 of an inch long and has a reddish color. It isn't a spider. So don't go looking for eight legs. It has 6 legs (like all beetles). It does look like a spider because of its pear-shaped body that bears a minor resemblance to the shape of a black widow spider.

What to Do About Pantry Pests

There is much you can do "before" you get pantry pests. These insects get into your pantry to feed on cereal, flour, grain, wheat, cake mixes, and more. It is important to protect these items from infestation by putting them in sealed plastic containers. The second best option is to be careful about what you buy from the grocery store and how you store your pantry items when you get home.

If pantry pests have already gotten into your pantry, it is best to call a licensed and experienced pest control company that deals with pantry pests, like Big Blue Bug Solutions. We know the common pantry pests found in South Portland homes and what is required to completely eliminate them. Get in touch with us and schedule a free inspection. We'll help you figure out which pest you're up against and what is needed to make sure they're properly dealt with.

Why Are Grain Beetles So Common In South Portland?

Grain beetles and weevils are nasty pantry pests that infiltrate your stored food. Find out how to keep pantry pests away from your food and your South Portland home.

Is It Dangerous To Have Pantry Moths In My Worcester Cupboards?

Pantry moths infest all sorts of food products. Learn how to identify, control, and prevent them with the help of Big Blue Bug Solutions.