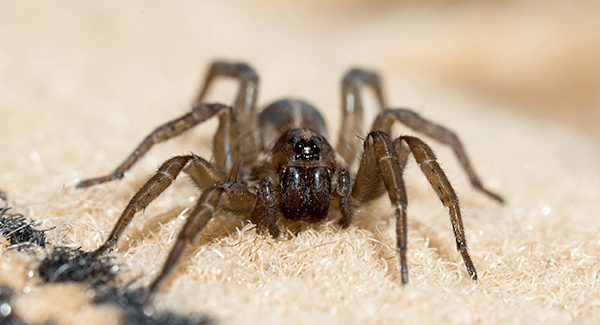 The increase in the population of other pests during the summertime also leads to an increased spider presence to prey on them. While spiders have their purpose in nature, they are not often considered a welcome housemate by homeowners, and rightfully so! There are several varieties of spiders that are native to New England including sac spiders, house spiders, and black widows. Let’s take a closer look at these unwanted home invaders:

Sac spiders are by no means a pest you’ll want to find living in your home. With their two rows of eight eyes, small pale-yellow body, and leg span that can reach about an inch long, these spiders are downright creepy-looking! Some people describe these pests as looking like “ghost” spiders.

Sac spiders eat other spiders, garden pests, and when food is scarce, will even eat their own eggs. They do not trap prey in webs; instead, they hunt for their prey at night. While they aren’t aggressive in terms of biting humans, they will bite if they feel threatened. The bite of a sac spider can be very painful initially, but, in most cases, is not harmful.

Common house spiders are generally less frightening to look at. These spiders are small and brown in color. Their body is comprised of a 1/4” rounded abdomen.

These web dwellers prefer to set up their sticky, tangled webs in areas that are frequented by other pests such as attics, basements, barns, sheds, and garages. They are essentially harmless, but their presence is usually not welcomed by homeowners. While these spiders aren’t dangerous, they can still create problems: their webs are quite a hassle to clean up and remove, and they can still be quite frightening to find in unexpected places.

Black widow spiders are one of the most easily identifiable spiders, with their bulbous body and shiny coloring.; the female will have the tell-tale red hourglass marking on their abdomen. While black widows are not very common in the New England area, they are present, and are one of the more harmful spiders.

Black Widow spiders like to live in protected areas, like under rocks or hidden away in woodpiles. They spin webs with strong fibers to trap their prey. Their prey consists of other insects and beetles, and occasionally, the female spiders will eat their mate. While this spider is not aggressive in nature, the black widow spider will bite if startled or disturbed. If bitten by a black widow, seek immediate medical attention. Their venom contains a neurotoxin that can be very harmful, and even fatal, to humans.

If you are tired of dealing with spiders, harmless or dangerous, in your home, the Home Owners Plan from Big Blue Bug Solutions could be your answer! With our routine visits to eliminate these pests, spiders in your home can be a thing of the past!

Are The Spiders In Milford Dangerous?

Are the spiders in Milford dangerous? Learn which arachnids might mean you harm today and find a method to keep these pests away from your home.

What Every Southern Maine Resident Needs To Know About House Spiders

House spiders can easily invade your Southern Maine home. Do you know how to keep this pest away?