Everything You Didn't Know About the Fleas in South Portland 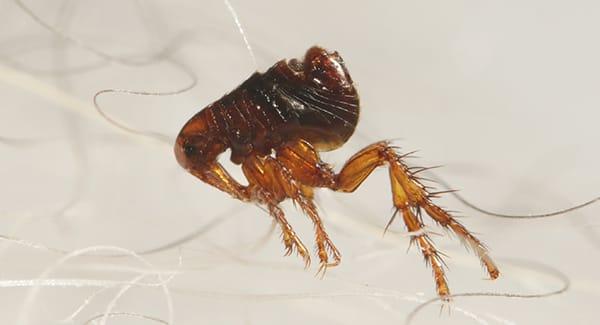 You likely aren’t all that interested in fleas. Those of us who study and are fascinated by fleas and their behavior are in the minority. That is until your beloved pet starts scratching. At that point, you might suddenly become interested. You might be wondering if fleas are harmful to you and how to get rid of them. We’ve got everything you need to know about the fleas in South Portland covered here.

Fleas can be hard to spot as they are under 1/8th of an inch long when fully grown. It’s unusual to be able to see a flea in any other stage, from egg to nymph, as they are minuscule. Adult fleas have 6 legs that, under close examination, look like they are covered in hairy spikes. The back legs are longer, allowing fleas to jump. While fleas sometimes look like they are flying, they do not have wings. They are brown to reddish-brown in color and their bodies are oval.

What is Typical Behavior for Fleas?

Fleas have four life stages, but the one we are most concerned about is the adult stage. Adult fleas need a blood meal to survive. Most often they prefer to feast on a family dog or cat. However, fleas will feed on humans when they need a blood meal. They can survive for many weeks without feeding but become voracious when a blood meal becomes available. They are parasitic and will stick with their host. They can get into your home even if you don’t have pets by hitching a ride with rodents and other unwelcome pests.

These tiny little parasitic pests pack a punch when it comes to destruction. Fleas were responsible for the Black Death in the 1340's, killing millions of people in China and Europe. Rats carry the bacteria that cause the plague and as fleas feed on them they pick up the bacteria. When the rats die the fleas look for a new blood meal. If there are no animals around, they will choose humans and can transmit the bacteria. Humans can then transmit the bubonic plague to one another through sneezing and coughing. Travel on confined ships in the 14th century was a contributing factor to the plague spreading.

One of the most recently recorded instances of plague was in 2017 in Madagascar where there were 2,500 cases reported. This is a far cry from what the plague did over 600 years ago but it can still be a major concern.

No matter how interesting fleas and their behavior may be, they are dangerous pests. What we might consider just a nuisance to our pets could be potentially deadly. A collaborated effort with your vet and a pest control professional is the most effective defense against them. Contact Big Blue Bug Solutions today to learn more about fighting fleas in your South Portland home.

Do you have a problem with fleas in your home? Learn how to get fleas out of your house.

Everything A Milford Resident Should Know About Flea Control

Our pets always seem to know how to make dark days so much brighter, so the least we can do for them is keep our homes protected from dangerous pests like fleas. Find out why that might not be easy to achieve without professional assistance.