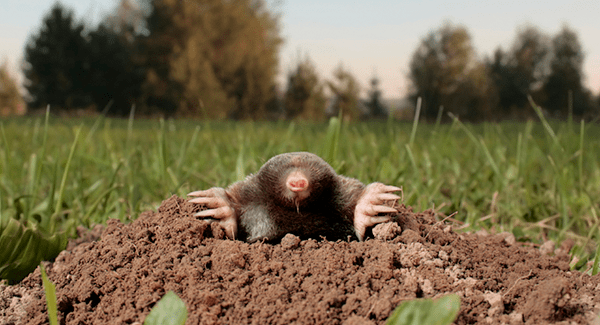 Moles are small pests that can become a huge nuisance for homeowners to have to deal with. Their constant tunneling underneath lawns and fields can cause extensive damage to the roots of grass and other plants; they leave behind unsightly mounds and create golf ball sized openings all over the lawns that they are invading. Moles can be a bit of a mystery as these solitary insectivores are rarely if ever seen by people, this is because they spend their whole lives underneath of the ground. To alleviate some of the mystery behind these pests, the professionals at Big Blue Bug Solutions have put together a list of interesting facts about these highly destructive pests!

The unfortunate thing about moles is that homeowners who take the time to ensure that their lawn is healthy and green are the same homeowners that are most susceptible to being invaded by moles. Moles typically like to choose lawns that have loose, moist soil, which allows them to dig easily. If moles have found their way onto your property contact the mole control experts at Big Blue Bug Solutions; we will have your property mole-free in no time.

South Portland Moles Are Back

Nope, we are not talking about a minor league baseball team or anything fun like that. We are talking about the extremely destructive pests that nobody in South Portland wants to invite to their property, as they are the cause of many homeowners'…

Moles are small pests that can become a huge nuisance for homeowners to have to deal with. Their constant tunneling underneath lawns and fields can cause extensive damage to the roots of grass and other plants; they leave behind unsightly mounds and…