What To Do About Bats Hanging Around Your Portland Property 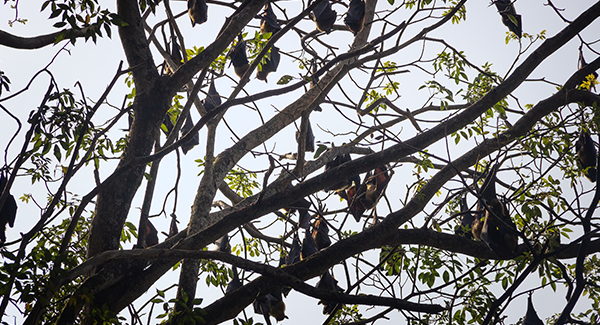 Bats are an animal that plays a part in many myths and stories found in cultures throughout the world. Some see them as adorable creatures, while others associate them with the spread of disease and filth. Overall, bats aren’t as aggressive as many might believe, but they are still quite dangerous to have around your Portland, Maine property.

Bats play an essential role in the environment by hunting down small insects such as beetles, moths, gnats, and mosquitoes. Also, they can be considered night pollinators similar to bees. They pollinate plants and even spread seeds around. But, bats are better to keep far away from your Portland property.

In this guide, you’ll learn how to identify bats in the area and get helpful prevention tips.

The most common species of bats in the area are the big brown bat and the little brown bat, although there are around 1,400 species worldwide. The big brown bat is approximately four to five inches long with dark brown fur. Their ears and face are darker than their bodies.

Little brown bats look pretty similar to their larger relatives, but they are two to three inches long and glossy brown.

Why Are Bats So Dangerous?

The issue with bats mainly comes down to the fact that they are vectors for different diseases. They can transmit rabies through a bite, and they are also known to spread other illnesses, including the Bubonic plague.

While bats aren’t necessarily aggressive, they will defend themselves, and even just having bats around can pose health risks because of their feces, known as guano.

This guano builds up over time and can cause safety hazards as it’s slippery, and it can also erode the side of buildings and machinery, leading to property damage. However, the biggest issue with guano is that it can release a spore called histoplasmosis that can cause a fungal infection.

Because of this, even having bats in sheds or other outbuildings can put you and others around you at risk of health problems.

Bats are mainly attracted to areas that give them ample access to food, so underlying pest problems can attract them. They also need areas where they can nest, and they are often found under eaves, along rooflines, or inside attics and outbuildings.

The best way to prevent bats, therefore, is to reduce or remove these factors that draw them in by following these steps:

Ideally, these steps will be enough to keep bats out of your Portland home. However, if bats move into your property despite your best efforts, you’ll need to take additional steps to safeguard your home and family.

How Do You Remove Bats From Your Property?

If bats have already started nesting around your Portland property, it’s a bad idea to try to get rid of them by yourself. For one thing, they are extremely difficult to get rid of, and, for another, they can also be dangerous. Bats are most likely to bite if you’re actively bothering them, so it’s not a good idea to put yourself at risk.

Instead, let the experts at Big Blue Bug Solutions handle the infestation. We have the experience and tools needed to remove the entire bat problem and ensure you and others around you are kept safe. To schedule your quote today, give us a call or send a message online.

What To Do About Bats Hanging Around Your Portland Property

In this guide, you’ll learn how to identify bats in the area and get helpful prevention tips.

Having bats around can be a hazard to your health. These critters harbor parasites, pathogens, and other illness-causing bacteria. Their feces contains a fungus that can trigger lung disease.

I have two families to protect. My wife & kids in the house....and my classic cars in the garage. I don't want pests endangering either one..so I keep both my worlds safe with BBBS home maintenance protection.