What To Do When Wasp Nests Are Out Of Reach 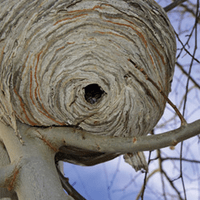 Wasps. The mere mention of them strikes terror into the heart of most people, and for good reason. Their sting is like a hot poker pushing into your skin, at best. At worst, you're heading to the hospital. That is why, when most people come across a nest, they get rid of it immediately, and with extreme prejudice. But what if you find a nest in a hard to reach spot? Well, before we tackle that, there are some important things you need to know first.

Unlike bees, wasps can sting multiple times. That means it only take a few wasps to unleash shock and awe on your skin.

Wasps are protective of their nests. If you attack them, they will attack you.

Wasps swarm. So, you do not want to be anywhere near a nest when it has been disturbed. Fighter squadrons have nothing on a swarm of wasps.

They follow you. Some species of wasps will actually pursue you. If even one wasp figures out, or suspects, that you are the threat to their nest, they will chase after you as a group. Some wasps are known to give chase for as much as 500 meters. Yellow jackets will even go around obstacles to get at you.

With this knowledge locked and loaded, let's consider the question. How do you get rid of a wasp nest that is out of reach? If we are being honest, the easiest and safest way to get rid of wasp nests, is to call a professional. Most do-it-yourself methods yield less than desirable--and sometimes painful--results. A few risks of attempting to get rid of wasp nests on your own include:

Bottom line is that pest professionals can help you learn more about wasps, and how to keep them from coming around your property. It doesn't "hurt" to call and find out.

Your service man, Marc, came to our house and was as kind and efficient and professional as one could ever expect. We appreciated so much his caring for our problem, and I wanted you to know how much we appreciated this. I hope that someone in your organization will pat him on the back for us.