Why You Don't Want To Share Your Home With Raccoons 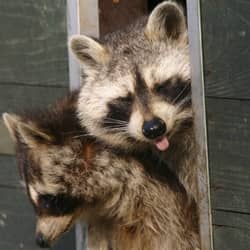 I'm just going to come out and say it, I'm a fan. Raccoons are just about the coolest animal in the world. When I was a young boy, my friend had a pet raccoon, and I was allowed to feed it through the wire mesh of the cage. I don't remember what food we were giving him, because this was a very long time ago. But I still remember the leathery hands of that raccoon, as he grabbed my finger, and held me in place. It felt like a little human hand encased in a plush glove. Seriously. It was the coolest thing I had ever experienced. Of course, I found out three days later that if the father had been home he would have never let me put my finger into that cage, because there had been "incidents", as he called them. But, as a young boy, I shrugged off the creepiness of that thought, and the memory was left untainted.

As a twenty one year old, I had another experience with raccoons. It was three in the morning on a Friday night, and I was in the middle of downtown. That's when I saw two of them, scurrying up the sidewalk on the other side of the street, hugging the storefronts as they went. Even at twenty feet away, they were huge! I wasn't even sure they were raccoons, until someone told me. Both of them were the size of a large dog--but way too fat to be dogs. My friend explained to me that city raccoons eat a lot, and they can get quite big.

So, why did I share these stories with you? Because I want you to know from whom this next information comes. My experience with raccoons in zoos, and in everyday life, was one of wonder and excitement. I knew there were dangers, but I had not experienced those dangers up close and personal. For me, raccoons have always been cool and fun. But they are anything but fun, if you find one in your backyard. Take some time to search for news stories on raccoons and you'll read of the little girl in Michigan whose face was mauled by a pet raccoon when she was a baby. You'll learn of raccoons getting into garbage cans, backyards, and breaking into homes. You'll learn about the poor woman who was viciously attacked when she tried to pet--what she thought was her cat. There are warnings of rabies outbreaks, parasites, malaria, baylisascaris, and more.

It is amazing that raccoons have hands that are so nimble, they can untie the laces on a sneaker. It is cool that they are smarter than a dog, and can grow to be as large as one. But mixed with its unpredictable behavior, and propensity for spreading bacteria and disease, these factoids become disturbing. I don't want a dangerous and clever disease carrying thief in my house, garage, or porch. That is why I take precautions to keep them away.

Raccoons are looking for food and shelter. I now put all of my outside garbage in well sealed cans. This prevents the raccoons from smelling it, and makes it harder for them to get into it. I put wire mesh around the base of my deck, so non-digging mammals can't easily get under. And I used to have my dryer exhaust come out under my deck, but now it has been channeled into the lawn. I don't want to give raccoons and skunks a nice warm cave to stay in for the winter.

If you have raccoons living on or near your property, call a pest professional to learn how you can have them removed, and how to implement exclusion methods specific to your situation, to keep them from coming back. Raccoons, wild or otherwise, are a danger to your family, and can be destructive to your home. I highly recommend visiting them at the zoo. But take strong precaution, if you find one in your yard. They may seem timid, but if threatened or sick, they can be dangerous. And, raccoons in your attic can spread disease and parasites--like, fleas, lice, ticks, and mites--through your entire house. Treat raccoons with caution. I know how tempting it is to want to get close to one. They are cool . But if you assume they're safe, you are putting yourself at risk.