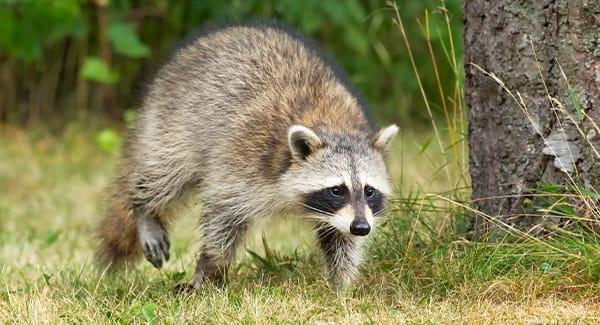 Most people can pick out a raccoon in a police line-up, even though it wears a black mask, or maybe it is because it wears a black mask. Raccoons have a distinct appearance, and this bandit-like appearance makes it easy to identify when you catch a glimpse of one in your South Portland yard. But there are some things you may not know about raccoons.

1. Raccoons in Maine can get big!

A raccoon is usually about 3 feet long. That includes its foot-long, striped, bushy tail. But a raccoon can seem a lot bigger if it is fat, and the raccoons in Southern Maine can be very fat. A typical female raccoon will be around 20 pounds, but when there are lots of options for food, she may grow to be as heavy as 40 pounds. Males can be even larger. Some male raccoons captured in Maine have been weighed in at over 60 pounds. Urban raccoons tend to be fatter than raccoons in the woods because they live off handouts from humans, which tend to be much higher in calories and fat. French fries put a lot more weight on the hips than bugs and berries.

Raccoons are commonly kept as pets. In captivity, a raccoon can live for more than a decade. Wild raccoons, whether in the woods or in the city, will only live for 2 to 3 years. There are many reasons for this short life expectancy. A raccoon can be killed in a collision with a motor vehicle, from a disease, from starvation, or from being killed by a predator.

You aren't likely to see a raccoon in the day, but at dawn and dusk there is a chance you'll catch one. If you do, you'll probably find it getting into something it's not supposed to, like your bird feeder or your trash cans. It is wise to keep your bird feeders at least 20 feet from your home to give raccoons less reason to come near your home. If you have receptacles outside, make sure they are secured in place and the covers can't be pulled off. Raccoons can open a trash can like a human.

Who is smarter? a dog, a cat or a raccoon? In a recent scientific study, it was found that the number of neurons in a brain determines intelligence--not size, as was once thought. When considering the intelligence of a cat and a dog, it makes sense the dogs are smarter. They have bigger brains. But raccoons, which have a cat-sized brain, have more neurons than most dogs. In fact, it is hard to tell the difference between a raccoon's brain and the brain of a small primate. So it isn't surprising that these clever animals are so difficult to trap.

It is crazy how many different things raccoons will eat. Here are just a few of the many things you'll find raccoons eating.

When raccoons come into your yard, they can bring ticks, fleas, mites and other parasites with them. They get onto roofs and damage rooflines to get inside attic spaces. In attics, they soak areas with their urine and leave their feces everywhere. If you've seen raccoons in your yard, it is a good idea to take steps to protect your home from raccoons.

Are you dealing with raccoons inside your South Portland home?

Big Blue Bug Solutions offers solutions for all the pests that bug you, even wildlife. We have one of the best wildlife control departments in the state. Our team can help you solve your raccoon issues and get you the results you're looking for. Reach out to us today to schedule service.

How Dangerous Are Raccoons In Connecticut?

Raccoons are so cute when they are waddling around in the woods, washing their food in the brook, and all cuddled together in their treehouse dens. They frequently are made into talking cartoon characters that our children adore, and spend hours…

The Trick To Keeping Raccoons Out Of Your Portland Yard

If your home is near a body of water or a wooded or grassy location, it’s probable you will encounter wildlife and animals; raccoons in particular. These creatures aren’t as cuddly and  innocent as they look, and you don’t want to tolerate…