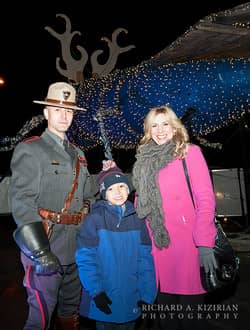 The 21st annual holiday lighting of The Big Blue Bug was Monday, November 25th. This year, we were privileged to have Boston Marathon bombing survivor Heather Abbott, her 8-year old special friend Drystan McClain* and Rhode Island State Police Trooper Roupen Bastajian do the honor of flipping the switch for the annual ceremony of lighting up (7500 lights) the Big Blue Bug for the holidays. Trooper Roupen Bastajian ran in the Boston Marathon and then when the bombs went off, ran into the aftermath and saved multiple lives.

To view the album of the evenings events, please visit us on Facebook.

*Heather has said that a very special friend is 8-year-old Drystan McClain of Middletown. Drystan, learned of Abbott’s injuries and knew she was from Newport. He had been in the hospital because he has a cyst on his brain that leaves him prone to seizures. He reached out to her and they met and a special bond developed.

Welcome to the Big Blue Bug Solutions brand new website! This new site offers our customers in Massachusetts, Connecticut, Rhode Island and Maine an easy way to get the information that they need about our services including home and commercial pest…

Many people today are looking for that ideal job or position with a company that provides a lifetime career. You want a company that is well established, has a great reputation, and is aggressively expanding. The product and/or services provided by…