Home › Blog › Frequently Asked Questions About The Bats In Worcester 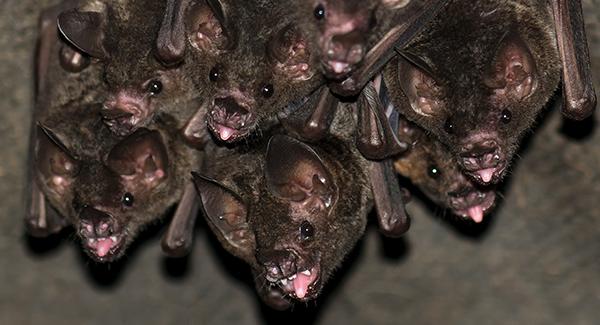 Bats are creatures that exist on all continents except Antarctica, with roughly 1,200 species and more than 40 species throughout the U.S. Following World War II, the emergence of powerful chemical agents such as D.D.T. substantially reduced the bat population in the U.S. Since environmental regulators began prohibiting many of these pesticides in the 1970s, the population slowly began resurfacing.

According to the Massachusetts Division of Fisheries and Wildlife, the state has approximately nine bat species—five of which experts consider endangered. The four types that remain most prevalent include the big brown bat (Eptesicus fuscus), the silver-haired bat (Lasionycteris noctivagans), the Eastern red bat (Lasiurus borealis), and the Hoary bat (Lasiurus cinereus). Bats are distinct from other winged creatures because each wing spans outward, has four bones that support them, and connects at the base to their ankle area or calcar region.

During the winter months, bats must generally either hibernate or relocate to warmer regions in the south. Homeowners should remain alert during the fall as bats may seek a warmer indoor environment.

How do bats control the bug population? All bat species in Massachusetts are insectivores that rest (roost) during the day and hunt at night using “sonar-like” detection capabilities. Amazingly, bats will consume hundreds or thousands of potentially bothersome insects each day.

What is the best way to control bats in Worcester? A licensed pest controller will handle these problems using the latest bat control products in the market. A Worcester pest control company employs professional bat control specialists that will assess the situation and devise a suitable solution.

Bats belong to the order Chiroptera. Bats are the second largest single category of mammals, behind only Rodentia (rodents). Bats are the only mammal that can truly fly.

Bats are known to be carriers of rabies, a condition that any mammal may contract. Rabies cases occur in less than 1% of the bat population. However, bats often carry harmful germs and parasites, including mites or fleas. Accumulations of bat feces, particularly indoors, may generate airborne particles associated with histoplasmosis—a potentially dangerous respiratory concern.

What are common signs of a bat intrusion? Homeowners often hear bats making squeaking sounds, scratching against walls, or witness them during flight. Once indoors, bats spread urine and feces that creates a foul odor. Do you want to know how to control bats in your homes? We’re here to help.

Are you wondering how to control bats in and around the house? Consider some of the following best preventative measures that include:

Consider adopting a comprehensive, multi-faceted strategy for effectively preventing bats. The best practices include implementing measures that limit the presence of insects, which are food sources, properly maintaining the exterior of the property, and ensuring that any openings remain covered with durable materials.

What Is The Easiest Way To Get Rid Of Bats?

Are you a Worcester area homeowner experiencing an intrusion involving bats or other undesirable pests? Big Blue Bug Solutions will deploy a qualified expert to your home who will conduct a detailed inspection of the premises and explain the best treatment option. Keep in mind that we prioritize safety and always stand behind our work will a satisfaction guarantee. Contact our team today for further information.

Bats are more than just a nuisance. They are also a threat to your family and pets. Learn how to get rid of the bats roosting on your property today.

Is your property attracting bats? Speaking with a local pest control professional is the best option for determining the reason for these unwanted intrusions.

I just wanted to let you know that working with New England Pest Control, yourself, and most notably Steve Gaudette has been a wonderful and very professional experience. Steve is always very attentive to Wright's Farm Restaurant's needs and has taken care of a problem that no other company was able to. He is a great asset to New England Pest Control and if he is an example of your technicians, then I can understand why your company is so successful. It has been a pleasure doing business with&hellip;