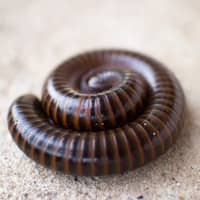 Let's be honest, as pests go, the millipede is not the worst one out there. Sure, it's disgusting--especially when it is crawling on your walls with a hundred of its brothers and sisters, but this little bug is hardly a threat. Does it seem strange that we would take this position, considering the fact that we are a pest control company? Well, to answer that, here is our list of things millipedes won't do in your home.

Those hundred millipedes are a whole lot better to have around than a hundred cockroaches. Cockroaches are dirty pests that are directly connected to the spread of harmful diseases. You also don't have to worry about millipedes leaving their shed casings, droppings, and urine in your air ducts, like those roaches do.

When you see a millipede, your first instinct isn't to move as quickly as you can to get away. A single millipede won't cause you to leave your balcony and come back later when it has left, like a wasp will. Those millipedes are also not likely to send you to the hospital because you're allergic to the venom in their sting. See? Millipedes aren't so bad.

When you open a box in the attic, a millipede isn't going to make you jump out of your skin. Do you know what will? Yup. A spider. Even though most spiders you're going to find in your home are harmless, they are still way more disturbing to find than a millipede.

We could go on, but you probably get the point. As pests go, millipedes aren't so bad, but that doesn't mean you want them crawling around your home. When you get year-round pest services from Big Blue Bug, you don't just protect your home from millipedes. You protect it from all those other pests that are even worse than millipedes. Give it a try. We think you'll agree. Life is better without bugs.

Welcome to the Big Blue Bug Solutions brand new website! This new site offers our customers in Massachusetts, Connecticut, Rhode Island and Maine an easy way to get the information that they need about our services including home and commercial pest…

Many people today are looking for that ideal job or position with a company that provides a lifetime career. You want a company that is well established, has a great reputation, and is aggressively expanding. The product and/or services provided by…