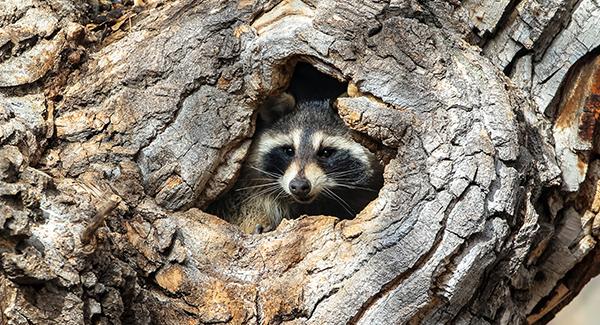 It is terrifying to open the door to the attic only to be greeted by a hissing raccoon. When unexpectedly confronting a growling, hissing raccoon, the natural fear is that it is about to attack. You don't want to live in fear of raccoons in your Worcester home; you need the best pest control in Worcester, Big Blue Bug Solutions. We will solve the raccoon problem at your home.

Raccoons Are More Scared Of You Than You Are Of Them

When you unexpectedly encounter this large rodent in Massachusetts, it will hiss, growl, and stare at you while waiting to see how you react. Vocalization by a raccoon when cornered is a scare tactic. Raccoons are not aggressive toward humans; they will only attack if they feel threatened and cannot find an escape from the situation.

Although raccoons are not aggressive, take their warning sounds seriously because they will attack. An attack by a raccoon can result in scratches and bites, possibly resulting in contracting a disease or infection. If you unexpectedly encounter a raccoon, back off and give them space, and they will run away.

You can get rid of raccoons by taking advantage of a raccoon's fear of sharp, loud sounds.

Sounds that scare raccoons include the following:

If you need to get rid of a raccoon quickly, you can use firecrackers, clang together pans, or yell. If you have a dog, do not let the dog attempt to attack the raccoon, but keep the dog on a leash and allow it to bark. Although these techniques will scare off raccoons from your property, they do not address the possible appeal of the raccoon to your property.

Are Raccoons Dangerous To Humans And Pets?

Raccoons are dangerous because they are disease carriers and account for nearly 30% of wild animal rabies cases. Not all raccoons carry rabies, but if the animal appears to be confused, is having difficulty walking, or foaming at the mouth, it may be rabid. If you provoke an attack by a raccoon and it has rabies, the disease can transmit through the bites.

Other diseases carried by raccoons include parasites such as tapeworm, flukes, heartworms, and roundworms. They can also transmit tuberculosis, toxoplasmosis, and salmonellosis. Raccoons carry other diseases like canine distemper, which are not harmful to humans; however, those diseases can be deadly to other animals like the family dog or cat.

We have seen an increase in raccoons in Worcester, including areas with a higher population. Raccoons are intelligent animals, and they have learned how to navigate urban environments on their quest for food and shelter. Because raccoons are an issue in Worcester, you need our professional, trained experts at Big Blue Bug Solutions. We will solve your raccoon problem and remove raccoons from your property

The Best Way To Keep The Squirrels In Milford At Bay

Have squirrels invaded your Milford, CT, home? Find out how to deter them, and how to remove them from your home once and for all.

What You Need To Know About Opossums In Southern Maine

Are opossums invading your Southern Maine property? Here’s what you need to know about this nuisance wildlife pest.