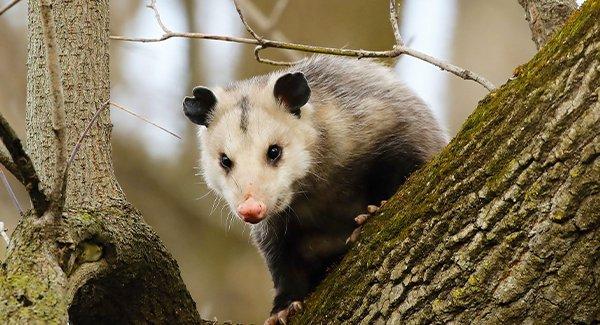 Is it possible to see an opossum and not think it is cute? The pointed nose, white face, and pink toes make them stand out from other animals you might encounter. Despite the fact that opossums are incredibly interesting to have on your property, there’s a lot of misconception surrounding these gentle creatures. While it’s easy to look at their sometimes scary appearance or their defensive hissing noises and write them off as dangerous, the reality is that opossums do more good than harm. That said, it’s important to know exactly what you’re dealing with when you encounter an opossum. Here are ten little-known facts about opossums.

1.) Possums Are Not Opossums

2.) Opossums Are Not Rodents

You read that right. They are marsupials, and they are the only marsupial in the United States. Like kangaroos, they have a small pouch that they use to carry their young.

3.) Opossums Have Many Disease Immunities

You might worry about whether a pest can spread harmful diseases. With opossums, you don’t need to worry about this as much. Their low body temperature and strong immune system allow them to resist many diseases, including rabies and Lyme disease. They’re even able to digest ticks without problems.

4.) Opossums Are Not Confrontational

Most opossums prefer to avoid confrontation. When confronted, they will either hiss, bare their sharp teeth, or play dead. They will bite if they deem it necessary to defend themselves or their young, so don’t approach an opossum if they are giving you warning signs not to.

Like many pests, opossums prefer to hunt during the night. This is because their vision is better when it’s dark, and they are better able to hide from predators. During the daytime, they rest underground or in a tree. Although it’s rare for opossums to go out during the day, they might do so if food is scarce or if their nest is disturbed.

Opossums have opposable thumbs similar to humans and primates. They are one of the few marsupials to have them. Known as halluces, these allow the opossums to climb trees to create nests.

Because opossums eat many harmful pests; cockroaches, rodents, and ticks to name a few; they help you out more than you probably realize. They also eat snails and slugs that could harm your gardens, and they can pull grubs out of your lawn, preventing even worse damage.

Many studies point to opossums having excellent memories when tracking down food or avoiding danger. In one study, opossums were able to locate a food source down a previously traveled runway better than many other foraging pests. Another study found that they remembered toxic chemicals a year after encountering them.

9.) Opossums Are Immune To Most Snake Venom

Opossums are one of the few animals that don’t fear snakes. They can resist the venom of nearly any kind of snake, the one exception being the coral snake, and can even eat them without problems.

10.) Opossums Can Still Cause Damage

Even though opossums are mostly helpful, they can still cause issues. They may accidentally introduce fleas and ticks, bite your children or pets if cornered, and cause lawn damage while digging up grubs. Call Big Blue Bug Solutions for help with getting rid of your opossums problem.

Keeping The Opossums Away From Your Home In Southern Maine

Opossums are nocturnal animals, so you're most likely to see them at night. They carry and spread disease-carrying bacteria. Here's how to keep them out of your property for good.

Do you have a problem with raccoons at your home? Get tips on how to keep raccoons out of your property.