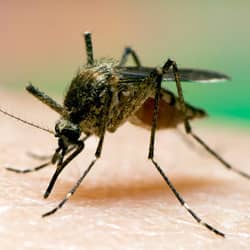 If you follow our blogs, you know that we like to be funny. While bugs and wildlife are certainly a threat to homes and families, we prefer to take a fun and lighthearted approach to getting vital information out. But, there is nothing funny about the threat of Zika virus. This is a virus that can cause microcephaly (reduced head size and brain damage) in unborn children at every stage of pregnancy. One child born with microcephaly is one child too many if you ask us. So, when we saw that the Rhode Island Department of Health announced the first confirmed case of Zika in the state, we were pensive. Here's why.

While the chances of contracting Zika are currently low, and may continue to be low, it is important to take precaution if you are with child. Like we said before, one child born with microcephaly is one child too many. This is a birth defect that can create a lifelong battle for a family.

Mosquito season is between April and October. Fewer mosquitoes breeding and hiding in your yard means less chance of being bitten.

Mosquito abatement is what government agencies employ to prevent mosquito-borne viruses because they know it works, but, municipalities can't get mosquito abatement everywhere it needs to be. It is the responsibility of businesses and homeowners to join in the fight. Be part of the solution that is protecting our state and our country from dangerous mosquito-borne diseases. Get mosquito control services for your property from Big Blue Bug Solutions before Zika has a chance to spread.

What is the best way to control mosquitoes here in South Portland? Find out today whether DIY or professional solutions are best for your mosquito problems.

Mosquitoes In Milford Could Be Making Residents Sick

Don't take a chance on ticks. Milford residents, be diligent and protect your home and family with the most trusted pest control this season.

Once again, I feel compelled to write because I had such excellent service from one of your technicians, Shane. He was efficient, courteous, helpful and nice to my dog! Thank you for sending well-mannered and competent inspectors.