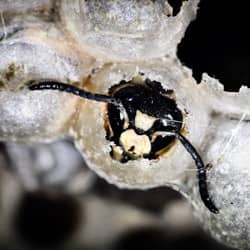 This is the time of year when wasps and hornets start to become a real pain, in a very literal sense. Stinging insects spend all spring and summer building their populations. So this is the time of year when you have a greater chance of running into one. But not all encounters are the same. Some stinging insects don't want anything to do with you, and others are wired to be aggressive. Let's talk about one of each.

If you have cicada killer wasps on your property, you might be tempted to think that this is the worst of the two wasps we're going to talk about. But it is actually not. While a cicada killer wasp can be an impressive two inches in length, they are solitary wasps. That means they aren't going to swarm and chase you if you accidentally stumble into a nest of them. And, they aren't likely to sting you unless you handle them. They have one goal in life and that is to capture cicada and bring them back to their home to feed to their babies.

While you're not going to have to worry too much about getting stung by a cicada killer wasp, a female can displace several pounds of soil when she builds her tunnels. This can cause issues if you have a brick patio that is laid on sand, or some other structure that could be destabilized by sinking ground.

Baldfaced hornets, which are not technically hornets at all but actually eusocial wasps, are not a stinging pest you want to run into on a fall day. These stinging insects have the same temperament as yellow jackets. They will aggressively defend their nest if you accidentally come too close. They will work together in a swarm and they will give chase, sometimes for several yards. And, since a baldfaced hornet's nest can have as many as 700 workers this time of year, this is certainly a pest that can ruin your day.

If you have a baldfaced hornets' nest on your home, or on your property, it is a good idea to have it removed by a professional. This stinging insect is a threat to have around, especially if you have children or pets.

When stinging pests begin to appear, call Big Blue Bug Solutions. We've been defending homes and businesses in Rhode Island, Massachusetts, and Connecticut, for a really long time. Let us help you protect your home from all of the many problems wasps and hornets can pose.

Living life without stinging pests is a quality of life upgrade you'll be glad you invested in. Reach out to Big Blue Bug Solutions and get started today.

Your service man, Marc, came to our house and was as kind and efficient and professional as one could ever expect. We appreciated so much his caring for our problem, and I wanted you to know how much we appreciated this. I hope that someone in your organization will pat him on the back for us.