Are The Stink Bugs In Connecticut Dangerous?

Home › Blog › Are The Stink Bugs In Connecticut Dangerous? 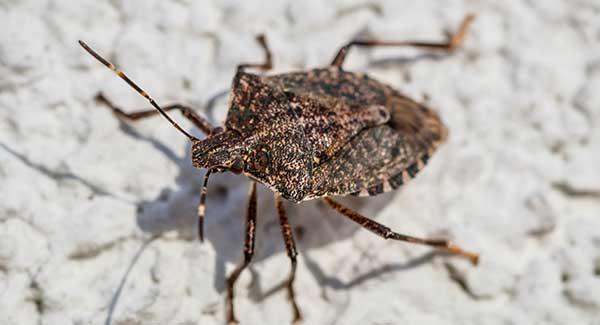 Stink bugs are a kind of pest that you might have heard about or even seen, but there are many different stink bug species in the world.

However, the main variety found around Connecticut properties is called the brown marmorated stink bug. These small insects are a mix of brown, grey, and tan mottled patterns, and their backs are in a unique shield-like shape. But, what’s really noticeable about these insects is the smell they emit.

The scent is often compared to skunk musk or cilantro, and it’s a strong and overpowering odor that isn’t pleasant. The brown marmorated stink bug isn’t native to the United States but has become a widespread invasive species after being introduced in the 1990s.

In this guide, you’ll learn all you need to know about these invasive pests.

Where Are Stink Bugs Found?

Stink bugs are a pest that usually lives outside. They will often live on host trees or in other plants, and they are even colored and patterned to camouflage against the natural world.

However, they will come indoors as they seek shelter from cold weather. Once they make their way inside, they will hide over the winter under flooring or inside of walls, and you’re unlikely to see them during this time.

Then, once it gets warm again, they will begin to emerge from these hiding spots. They congregate together in large groups and prefer walls or windows that face the sun.

For the most part, stink bugs are considered nuisance pests. They aren’t considered dangerous to people or pets as they don’t spread illnesses and aren’t known to bite or sting. However, this doesn’t mean they can’t cause any problems.

The main concern here is that stink bugs are so invasive, and their numbers can grow out of control once an infestation is established. This, combined with their gross odor, makes them difficult and also disgusting to remove.

Also, stink bugs can be a serious agricultural pest which is a concern for farmers and many other people as they can do a significant amount of damage to plants and gardens, too.

How To Prevent Stink Bugs

Stink bugs are a pest that is much easier to prevent than to remove, especially given their invasive nature. To help keep them away from your home or business, you can implement the following steps:

These steps are great ways to minimize the risk of stink bugs moving into your home but will do little to eliminate an existing population.

If you’re already dealing with stink bugs around your property, removing them isn’t a fun process. Instead, let the experts at Big Blue Bug Solutions handle these stinky pests. With over 80 years of experience, we will remove the infestation in no time, and we can work with you to ensure that they don’t come back in the future.

Call us today to get started or to request a quote.