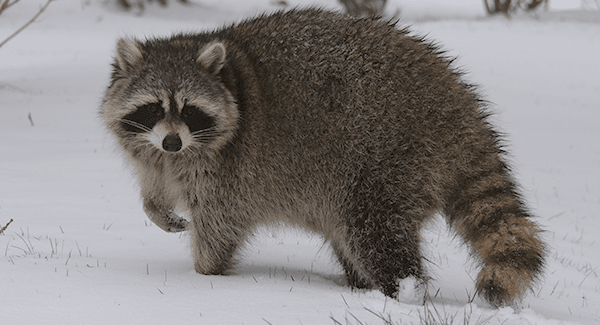 Raccoons, squirrels, and skunks are more than just a nuisance in New England - they can cause extensive property damages and put you and your family at risk for diseases. Squirrels and raccoons have been known to rip up insulation in attics, chew through electrical wiring, and build nests in the soffit or wall voids. Their feces can contain diseases that can be transmitted to humans, which means getting rid of the animal may not be enough - you may also need to do a thorough cleaning to remove all contamination. Skunks are the second largest carrier of rabies and are hard to get rid of once they’ve claimed your porch or other areas as their home.

Raccoons have a masked appearance on their face, with an area of black fur around their eyes on a white face. They are the largest carrier of rabies, but they’re also a carrier of a roundworm, which is found in their fecal matter and causes severe damage to the nervous system and even death to humans if it is ingested. Raccoons will create dens in cars, wood piles, abandoned buildings, chimneys, haystacks, and pretty much anywhere they can escape the cold. They are mostly active at night and only travel about a one mile radius from their den.

If raccoons get into your home, they’ll rip apart your air ducts, tear up insulation, rip wallpaper off walls, chew through electrical wires, and leave fecal matter everywhere.

For a small animal, squirrels can leave a surprising amount of damage behind. They get into the spaces between walls like a mouse or rat and can rip apart insulation to build nests, chew through electrical wires and cause house fires. They sound like a herd of elephants running your ceiling and walls when they are in there, too! Squirrels in New England are usually grey with big bushy tails, or smaller and red. Female squirrels can have babies twice a year and have two to five babies each time they mate.

More than just a strong, offensive odor, skunks put people and pets at risk for rabies. Skunks dig under outbuildings and porches, or may create a den in your crawl space. Not only are they a nuisance the year they do this, but skunks tend to return to the same location year after year to raise their offspring and burrow during the cold New England winters. They’re quite easy to identify with their black and white coloring and telltale stripe down their backs. If you or a pet comes into contact with a skunk, you can expect to get sprayed by their scent.

To keep wildlife in the great outdoors and not in your home, try the following prevention tips:

If you’re struggling with squirrels, raccoons, skunks or other wildlife creatures, give Big Blue Bug Solutions a call. Our expert technicians will inspect your property to determine the pests that are inhabiting your home, and create a wildlife elimination plan based on your unique needs. Services range from trapping to exclusion to trap-and-release programs to modifying the habitat to discourage wildlife. We’ll help you eliminate your existing wildlife problem as well as prevent future problems.

Keeping The Opossums Away From Your Home In Southern Maine

Opossums are nocturnal animals, so you're most likely to see them at night. They carry and spread disease-carrying bacteria. Here's how to keep them out of your property for good.

Do you have a problem with raccoons at your home? Get tips on how to keep raccoons out of your property.