The Real Reasons For Winter Spiders 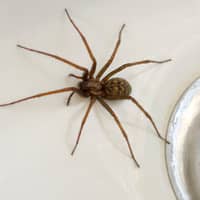 Have you seen more spiders inside your home lately? Have you asked a relative or a friend why those spiders are coming inside or made some guesses on your own? The common belief is that spiders enter homes to escape the cold of winter. Not only is this wrong, it is exceptionally wrong. In today's article, we're going to look at a few things you probably didn't know about house spiders. When we're done, you're not going to be a spider expert, but you may be a lot closer to understanding why you're seeing more spiders lurking in the corners of your kitchen and bathroom.

In our coverage area of Massachusetts and Rhode Island, it gets cold in the winter. Really cold. So cold that no spider in its right mind would want to be out in it. But spiders don't have an instinct that tells them to go south for the winter--or to go inside a nice warm house. Instead, they are equipped with a sort of natural antifreeze that helps them resist freezing (like other cold-blooded creatures.) You see, cold-blooded creatures are whatever temperature the air, soil, or water is around them. When it gets too cold, most cold-blooded creatures die because crystals form inside their veins at freezing temperatures. Spiders can live in below-freezing temperatures. Some survive in temperatures as low as -5 degrees Celsius.

Out in the woods, spiders will hide under leaves, inside a log, behind some bark, under a rock, or some other natural hiding space. When snow covers the ground they will lay perfectly still in their hiding place, conserving energy, and using the snow as a blanket of protection from wind chills that can bring their core temperature below the threshold. But, an exceptionally cold winter with very little snow is a death sentence for large numbers of spiders.

So, why are all the spiders in your home? The truth will probably disturb you. Those spiders have always been there. They aren't called house spiders for nothing. This species of spiders venture into homes, live in your wall voids, attic areas, crawl spaces, and other quiet areas. When you start to see spiders coming into your home what is actually happening is that all the spiders that hatched in spring have grown, and the more they grow, the more they have to compete for food. This is also the time of year when many spiders are sexually active. That's why you'll see them wandering around more. They're looking for a mate.

There you have it. Now you know why you're seeing spiders in the corners of your kitchen and bathroom. If you don't want to see spiders in your house anymore, give Big Blue Bug a call. Our bug specialists know how to get rid of spiders (and the bugs spiders eat). We've been protecting homes in Providence, Cranston, Shrewsbury, and throughout New England for over 75 years. We'd love to help you protect yours.